First the reef, then the Rainforest, and then CASSOWARIES! 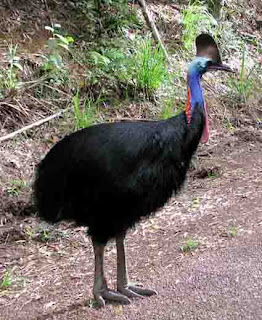 After visiting the reef, I took off to Daintree National Park-- where there "Reef meets the Rainforest". It was absolutely gorgeous! Take a look at the pictures-- to do so click on the link to the right. Included in the latest album are pictures from my trip out to the Great Barrier Reef.

On the way out to the rainforest on Thursday, the bus driver was telling all sorts of amazing plant and animal facts. He told lots of stories of people making pretty bad choices in front of crocodiles and dealing with some terrible consequences. He said that he felt bad for the crocodile whenever that happened because the crocodile is always either killed or taken to a croc farm when it hurts a human. The guide said that he has never heard of a time that a croc hurt a human when the croc wasn't provoked. Also, the guide showed us a plant in the rainforest that-- if you touch it-- will make you itch for 10 years. I decided to keep my hands to myself.

The very most exciting sighting of my time at Cape Tribulation was when I was walking down the beach with the water to my right and the forest to my left and out on the sand walked a CASSOWARY.

What's a cassowary?!?!?!? See the picure above! It's a HUGE bird that doesn't fly and looks slightly prehistoric (like it belongs with the dinosaurs). The one I saw was about 5 feet tall-- possibly larger than you, dear reader. It's claws are bigger than both of your hands, and I was warned over and over on the way into Cape Tribulation that if I was lucky enough to see this endangered bird, I should stay far far way, for it could attack.

Have you ever seen road signs in the US that warn drivers that elk or deer could cross the road? Well in addition to signs that have kangaroos on them, there are signs warning of cassowary crossings. Because they are an endangered bird, if a driver in Australia accidentally runs over a cassowary, they have to pay a big fine and maybe even spend time in jail.


Well that's all for now, dear reader. Tomorrow morning I am heading out of Cairns and on to a place called Springbrook National Park. I'll be sure to let you know all about it!
Posted by Ms. Ventura at 2:28 AM