From Guin (not Gu-win), Alabama, to Tupelo, Mississippi 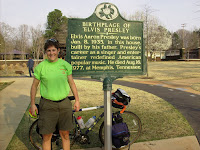 At the birthplace of Elvis in Tupelo sporting my Beaverton, Alabama Coffee Cup t-shirt.
Wow, it's been so long since I've written to you Dear Reader that I actually had to ask my mom to write a blurb in the blog about my whereabouts. I was afraid that I would not get to use the computer until I got to Jackson (which will now be at the end of this week-- March 16th). But alas I have found the library in Kosciusko, MS. Aren't you glad that you don't have that word on your next spelling test?

But before I tell you all about Kosciusko. , I need to catch you up on my trip north (Birmingham to Tupelo) before I changed directions and came south (Tupelo to Jackson). After the last time I wrote you, I was lucky enough to find a great place to put up my tent in Guin, Alabama. No, not Gu-win-- that's a different town four miles east of Guin. Anyway, Mr. and Mrs. Webb let me stay on their property that night and actually took me out for dinner in Detroit. No, not Detroit, Michigan, but Detroit, Alabama. We ate at the Woodpecker-- a place I never ever would have found on my own. Thanks Mr. and Mrs. Webb!

After I packed up and had coffee with Mrs. Webb the next morning (Saturday, March 10th)-- I headed onto Beaverton, where I had a delightful breakfast (my favorite-- two fried eggs, toast and hash browns). There were four women having breakfast at the next table and they questioned me up and down and sideways about my trip. When I finished eating, everyone in the diner headed out to give me a send off and check out my bike. I got to take a picture of all of them with Bear and the bike, and they gave me a Coffee Cup t-shirt. I also saw those four woman again in their car as I pedalled down the road. Thanks!

I got all the way to Tupelo that day, and checked out Elvis Presley's birth home-- now a museum. It was fantastic. There is something about heading to Tupelo that made me start singing. I tell you-- it might have been the fact that it was a 63 mile day and I needed to distract myself-- but I think it was actually the fact that I was going to see Elvis's birthplace that made me start singing Blue Suede Shoes. Ask your teacher to play it for you. You'll catch on quick and you'll be singing it too.

Did you know the Gu-Win is named because it is between Guin and Winfield? I'm not sure WHY they did that, but that's the way it is. Both Guin and Gu-Win have the exact same pronunciation. Well, at least to you Northerners! 8-)

Glad you got to see the birthplace of the King. As a Memphian, I have a special place in my heart for Elvis. I'm quite fond of Heartbreak Hotel myself.

Thanks Lynn. Wish I would have made it to Memphis! Next time...

That pronounciation is a trip. Definitely different here in the south. Ha!