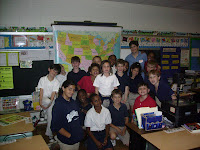 Ms. Labbit's class at Woodvale Elementary
Not in the same place, Dear Reader, just in the same city-- Lafayette, Louisiana. Oh how different life is in southern Louisiana. I feel like as soon as I got into crossed over the Atchafalaya Basin into Cajun country everything changed. The music, the people, the food, the accents, and the language.

Let's start with language: Here in Cajun county people speak a dialect of French known as Cajun French. When speaking English, the accent sounds like a cross between a Southern accent and a French accent. (That's the best way I have found to describe the accent.) Why French? It is because back in 1699 the French claimed this land as a colony. Cajuns can trace their heritage back to when the British expelled the French Acadians from Nova Scotia centuries ago.

Now onto the food. I have not yet been brave enough to try it, but I am looking forward to a meal of boiled crawfish. Everyone eats it, and I'm due to take a taste. I have already tried boudin and crackilin. Thanks to the kids at Woodvale Elementary and their teacher Mrs. Labit, I got to have fried alligator at Woodvale Elementary. It really did taste like chicken.

Speaking of Woodvale, I had a great time with some very lovely third graders. Next year they will take part in a French immersion program that all fourth graders have there at the school. French immersion programs are common in most parishes in southern Louisiana. The schools did not always have French classes. In the early to mid 1900's speaking French was looked down upon here and because of that, the language was almost lost. Now it seems to be savored.

Ah! And the music! Wow, well, I got to stay in clearly the BEST place in Lafayette, the Blue Moon Saloon and Hostel. It was so much fun. I especially enjoyed the Cajun jam on Wednesday night. People came streaming onto the back porch at the Blue Moon with fiddles, accordions, guitars, and other instruments. I was told that some of the very best players were there and thanks to another visitor at the Blue Moon, I even learned how to dance to Cajun music. Thanks Kay!
Posted by Ms. Ventura at 3:00 PM