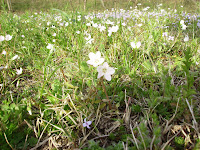 The flower "Spring Beauty" on the side of the road on the Natchez Trace
Dear Reader, I feel like I have taken a break from the South. Not that I needed a break... don't get me wrong. But being on the Natchez Trace Parkway is just, well, an entirely different experience than anything I've experienced up to this point. It's quiet. There are no gas stations, no stores of any kind, no houses.... just a long road lined with budding trees, spring beauty, and historical markers every five miles or so. It's a road that has been used for at least hundreds of years first by the Choctow Indians and then by the early white settlers and now it is a National Historic Parkway. Check out the link.

Because there aren't many stores, I've had to be mindful to carry enough snacks and water to last through the day. As you can see by checking out the calender, my days have been nice and short, allowing me to relax at each stop. There are a couple of towns that are right on the Trace and one of them is French Camp. I had a great lunch there today-- certainly a relief to eat a nice meal after not so great dinners I've been making for myself on the stove :)

I started on the Trace in Tupelo, Mississippi- birthplace of Elvis, and here I am now in Kosciusko, the birthplace of Oprah. (I only read that, I haven't actually seen it yet.) I haven't had much time to explore the town-- I just got here, and was excited to catch up with you so I headed straight for the library.

I'm thankful that the library was open. You see I have passed by many towns that don't have a library, or towns that have a library that is open rarely. In fact, I passed by one library in Alabama that was open from 1-3 pm on Mondays through Thursdays. Isn't that sad? Dear Reader-- that would mean that the only time you'd be able to go to the library would be during spring break or summer break. Anyway, I'm happy surrounded by books and in front of a computer here in Kusciusko.

Just before I started to catch up with you I did some research here at the library on the town I'll be going to next. I'll be heading east away from the Trace to go to Philadelphia, MS. That is where three civil rights workers- Michael Schwerner, James Chaney and Andrew Goodman were killed in 1964 when they were working towards getting more African Americans in this area to register to vote. I look forward to writing to you about that in the next coming days.

Until next time Dear Reader. Oh-- thanks for the comments-- they've been so great!! Make sure you go back to the comment page you wrote on to see my response. Also-- I'll put more pictures up just as soon as I can. Cheers!
Posted by Ms. Ventura at 3:03 PM