Beaded in Jackson, then Back on the Trace 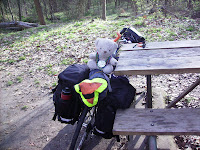 Click on the picture to read Bear's button.
Happy St. Patrick's Day, Dear Reader. Ok, I know that I'm a few days late, but boy did I have a good time in Jackson at the largest St. Patrick's Day parade in the south-- led by the famous Sweet Potato Queens. It was hysterical, and as you can see by the picture, Bear is still celebrating even though we have made it to Natchez and it is now Tuesday the 20th of March.

Beads were being thrown by just about everyone in the parade. Beads? Yes, beads. I know, I though it was a Mardi Gras thing too, but apparently it's also for St. Patrick's Day. I caught so many that I started to give them away to people around me. The only ones I have left are still on Bear.

That's about the extent of what I got to do in Jackson. All the buildings downtown were closed due to the parade. I did get to have dinner on Friday night with James and Bonnie and their family after going to services at Temple Beth Israel. Services were great-- and so was dinner-- thanks for the hospitality and my first taste of challah in months!

I got back on the Natchez Trace on Friday after coming back from Philadelphia. I'm still glad that I went, but my trip there has fully consumed my thoughts since then. When people ask how my trip is going, I find myself talking about Neshoba County. Thanks to family and friends who have written and called since that last posting.

Getting back on the Natchez Trace was a blessing. The parkway itself is a blessing to the South. What a wonderful break from traffic and rushing around to be on a road where only bends and hills and spring beauty abound.

I'm here now in Natchez and I look forward to telling you all about this wonderful town in the next posting. Cheers Dear Reader!
Posted by Ms. Ventura at 2:25 PM

Give Bear a kiss for me!!!
You are wondeful pal :)

Right back at Blankie!

so ms.v how have you bin on the. road with bear good or bad i got two dog loca and choto they like to play a lot with me if you get this messge say hi to bear for me love veronica

I will say hi to Bear from you, Veronica! We were on the road together for 2 months!

Hello Marcia,
Thank God you remained safe until you completed your venture!! I am so impressed with you and your ability to take such leaps of faith. I am one of the cyclists you met on the trace the Sunday after you visited the St Patty's Day Parade in Jackson. You headed to Rocky Springs to spend the night. All of us continue to travel the Natchez Trace each weekend only a little earlier due to the southern humidity and heat!!
Take care and hope to see you again someday. You were a true inspiration!!