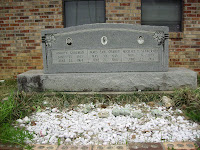 Good day, Dear Reader. I'm writing to you from Philadelphia, Mississippi, the county seat of Neshoba County. It is home to one of the most famous and pivotal civil rights killings-- the deaths of Michael Schwerner, James Chaney, and Andrew Goodman. They were killed on June 21, 1964 by the White Knights of the Ku Klux Klan. Please read the links here as they provide so much information. The one from the Neshoba newspaper at the time of the slayings is a disturbing and yet fascinating read. It gives a true sense of what the feelings were at the time in 1964.

It is unfortunate to say the very least that in so many ways not much seems to have changed here. The town is incredibly segregated, and hardly anyone I came across yesterday wanted to talk to me about what the town is so famous for: the slaying of those three men. The marker (above) sits at the Mt. Nebo Missionary Baptist Church, a church in the African American community side of town. If I hadn't had the good fortune of finding someone at the court house to point me in the direction of the marker, I would have never found it. The church is at the corner of Carver and Rea off of Railroad Avenue.

In 2005 the Mississippi State Government named a section of the highway the men were driving out of town on the "Schwerner, Chaney and Goodman Highway". There is a sign outside of town to mark that. I was honked at three times as I stopped to take pictures of it.

As I was coming back to the motel last night where I was staying here in Philadelphia, I talked with a woman in her 60's about what she remembered about life back then. I was horrified at her perspective. I asked if there would ever be a marker in the center of town she shook her head, and then she said "those boys got what was coming to them". "They were trying to change us". "It's just like slavery...people always blame the whites". "People need to just let it go and forget about it".

From my travels in general on this bike trip through the South, it seems like that extreme racist sentiment is generational for the most part. That is to say that the older white generation that lived through what happened in 1964 often have the very same feelings they did back then. People my age (in their 30's) seem to feel less so, and their children (people your age, Dear Reader) feel even less so.

In any case I am leaving Philadelphia today with a heavy heart and sore eyes. I hope that one day there will be a monument for those men in a prominent place in town... one that everyone would see if they went through the town-- like in the park across from where I sit perhaps-- near the town square. There are statues there dedicated to Neshoba County men who died in World War II and even to the people who died in New York, Pennsylvania and Washington, D.C. on 9/11/01. More importantly though I hope that monument stands for something-- for acknowledgement of what happened here. It is something that I hope is never forgotten.

With each post I am increasingly impressed with your writing. You handled what seemed to be an incredibly challenging stop with grace, persistance, and care.