Thanks Buchanan Elementary-- What a GREAT visit to Baton Rouge! 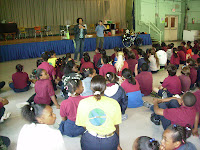 On stage with Mrs. Martin in front of students at Buchanan Elementary!
Yesterday I was MAJORLY spoiled in Baton Rouge by a wonderful group of kids at Buchanan Elementary in Baton Rouge, Louisiana. Thanks to Mrs. Martin's class and her wonderful group of fourth graders for the warm welcome, the very sweet cards, and the alligator cake which I demolished for dessert last night.

And not only did I get to speak to Mrs. Martin's class, I also got to chat with many other classes who came in and out of the auditorium on their way to and from lunch. Those kids had some great questions and comments-- especially about setting and keeping my goals. I found it pretty rejuvenating to talk to them. Thanks Buchanan-- you have a GREAT school.

After visiting Buchanan Elementary I road downtown and visited the Louisiana History Museum. I learned so much about the many claims there have been-- Spanish, English, and French-- to Louisiana. I also learned about the critical and devastating role the Mississippi River has played in the history of the state. There was a flood in 1927 that was so bad that many places continued to be flooded for MONTHS afterwards. During that time, Herbert Hoover set up refugee camps to help the hundreds of thousands that lost their homes. But also during that time African American men were forced to build back the levees while their families waited at the end of the line each day for supplies.

As promised: a few more words on the differences between the North and the South. For today: religion. In Seattle and where I grew up just north of Washington, D.C. in Maryland, religion has been important to my life, but to be honest, I don't know what the role of religion played on my teachers' lives, in the life of the mayor of my town, or really anyone else except for my close family and friends.

Down South, religion is of utmost importance in people's lives. There is an abundance of churches in both the rural areas and the city; prayer before a meal shared with family or with new friends is commonplace; and most schools I have come across have at the very least a moment of silence to start the day. Schools in Seattle do not have a moment of silence or prayer, and for the most part, people do not share their religious views in public(work places or schools).

An interesting difference, Dear Reader, that I thought you would be interested in. In the next posting I will write about differences I have noticed in schools. Have a GREAT weekend!
Posted by Ms. Ventura at 6:18 AM

Wow that was cool uhhhhhhh ow yaeh i frgot you areso cool because you can travel to different stats and touns and places and stof.and uh....... yaeh i like candy and stif i have 2 dogs that their names are lucky and shger and i have a spider named mr.ferst and i have a parot named beneto and he only likes girls so he will like you.and he says pritty lady only if he likes you so you are cool and i am to.

I don't think I can top Shayna's comment, so I will just say--Marcia, you are the best!! We miss you in Seattle.

That's pretty funny about your parrot. And thanks for the compliment!

I miss you too, my dear friend. I'll see you in just a few weeks.

WHERE ARE U RIGHT NOW

ARE U IN IDAHO RIGHT NOW

I know that u are in siverspring but are u near to seattle. and what day are u going to be vistening us tommyBui

I am in Silver Spring, MD right now which is pretty far away from Idaho and Washington State. No worries, though-- I'll be back in Seattle right around the time that you're done with the WASL. :)