It's All About the Music Here in New Orleans 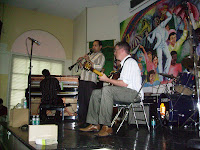 Evan Christopher and his band played inside at the Jazz National Historic Park at the French Quarter Festival today.
Wow! I am still hearing jazz in my head after spending a day celebrating musicians and music here in New Orleans. Remember how I told you that I was working in Habitat for Humanity Musicians' Village in the Upper 9th Ward? Well musicians are actually going to be living in Musician's Village. Two very great ones received keys to their brand new home (a duplex) today. The house that was dedicated today is only three doors down from the one I was working on.

What a very touching ceremony it was today in Musicians' Village. Speakers included Congressman William Jefferson, the director of Habitat for Humanity, and the musicians who will be living in the house. Volunteers and sponsors were thanked, and people-- especially the congressman, talked at length about the levee system. He made a very clear point that it was not the hurricane that damaged the city--- it was the faulty levee system. Levees are the man-made structures all along the Mississippi River and along the canals here in the city to keep the city from flood. Well, when Hurricane Katrina came, the levees were not strong enough to keep the water out-- and that is what caused the damage-- the flooding. Imagine having four feet of water in your house. Yikes! Levees were to be maintained by the Army Corps of Engineers, but most people agree that the maintenance of the levees was poor at best, and now billions of dollars has gone to repairing them.

After the ceremony Todd, another Habitat volunteer and I went over to the French Quarter to listen to music, music, music. Specifically: jazz, jazz, jazz. Ah! I have an appreciation for jazz now more than I ever have. It's a genre of music developed in New Orleans. And there were many stages of music with many bands playing on each one. My favorite band playing today was Evan Christopher's Jazz Traditions Project at the Jazz National Historic Park. Good Stuff.

I've had such a fantastic time here. One of my favorite writers, Nobel Prize winner Dr. Toni Morrison spoke at Tulane University here on Tuesday night. I learned so much about the writing process by listening to her speak. She read parts of the endings of several of her books and answered questions from the audience.

New Orleans is a great town and I am so happy to have ended my trip here. Contrary to what dozens if not hundreds of people told me coming out here-- I feel just as safe in this city as I do in Seattle and again-- I encourage anyone and everyone to come down here and experience the town for yourself. It is indeed a city like no other.

On Monday I will be taking off from New Orleans to go back to Maryland. I went to a bike shop today and they're shipping my bike off back to Seattle-- so I guess the bike trip is officially over. What a trip -- I have had such an amazing experience! It is the kind of trip, I am sure, that I will be thinking about for years to come. When I am back in Seattle, I will be spending my time writing much more about my experience down South.

But for now, time for bed. I'll be dreaming with tunes in my head, I am sure. All the best, Dear Reader!
Posted by Ms. Ventura at 7:27 PM

Hey Pal...the bike has been shipped?? Wow, crazy this time is coming to a close. I look forward to more in-depth stories about all that you have done :)

were are you write now. You realy went to many muisc places.

HI MS.V!!HOW MANY MORE DAYS TILL YOU COME BACK TO SEATTLE??HOW IS THE MUSIC OVER THERE IN Orleans

Becky! The bike is shipped. Whew, what a trip! Can't wait to see you in person!

Genaro and Maria,
I did go to many music places. And the music was WONDERFUL. I had a GREAT time. Right now I am back in Maryland, and I'll be coming back to Seattle at the very beginning of May and I can't WAIT to see your class.

Thank you for sharing your bike trip with all of us. What a fabulous experience!And what could be more fitting than having your journey end in New Orleans... one of my favorite cities.I look forward to hearing more about your experiences when you return to Seattle.

Thanks so much for your very kind words. Thanks too for your support for this trip starting well over a year ago.

See you in just a couple weeks! All the best-